After my previous post (http://thewendywatsonblog.blogspot.com/2012/07/school-library-visits.html) the reference librarian at the Windham Public Library unearthed the following from the library's archives: 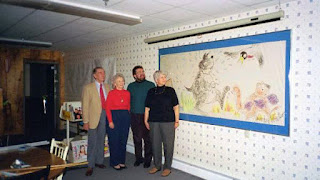 Wendy Watson Artwork at Windham Public Library (left to right, Bill and Barbara Tolman, Steve and Sandie Mizerak, photo likely taken by Children's Librarian Laurel Parker)
An original piece of artwork by children' book author and illustrator Wendy Watson is in the Windham Public Library, thanks to many people.
In July, 1998 Barbara and Bill Tolman of Scarborough, Maine attended an Elderhostel presented by the Hulbert Outdoor Center of Fairlee, VT at Dowds' Country Inn in Lyme, NH. One of the topics for the week was Children's Authors and Illustrators. On Monday, July 5th, following the fitness walking session, the Elderhostel participants had their class session with Ms. Watson.
Wendy asked them what they had seen on their walk. She listed their animals, including a dog, a squirrel, and a robin. Then she asked questions such as, "Was the dog skinny or fat?" and "Did it have on any clothes?"
Using crayons and newsprint Wendy sketched a very large dog chasing a squirrel running away with a pile of clothes and a very noisy robin letting the dog know where the clothes had gone. With the artist's body blocking the far left side of the paper, Wendy sketched in a No Swimming sign. She stepped aside revealing it to the class, surprising everyone. When it was complete with color the class had a lesson on how to create a story with a few familiar elements.
The Tolmans asked what would become of the piece. Would it be possible for them to take it to Maine and donate it to the library where their daughter was the Children's Librarian? When they left at the end of the week it was rolled up on a tube for safe travel. On July 12, 1998 the art was presented to their daughter, Laurel T. Parker. The art work was now in Windham.
The next step was to find a framer who could do the work for such a large piece. Sandie and Steve Mizerak, owners of Little Sebago Gallery and Frame in Windham, wanted to study the piece, confer with colleagues on the best methods to use, and they were interested in a community service project. They agreed to take on the project for only the cost of materials while donating their time. The only catch was that the library would have to provide transportation because it would be too large.
The call came; the piece was ready. It was taking up a lot of gallery space. That afternoon Jeanne Thurber, a Friend of the Windham Public Library, transported it to the library in her truck. Snugly tucked in a back room in the library for a few days, the piece was ready to hang in the Children's Room.
On Thursday night, October 29, 1998, Barbara and Bill Tolman, framers Sandy and Steve Mizerak, and daughter and Children's Librarian Laurel Parker met after the library closed and hung the original art by Wendy Watson. The blue mat and silver frame fit the Children's Room perfectly, the art work looked home.
The library thanks all those involved with this project: Wendy Watson for her artwork, Deb Williams at the Hulbert Outdoor Center for allowing the piece to come to Windham, Barbara and Bill Tolman for thinking of our Children's Room and transporting it to Maine, Sandie and Steve Mizerak for their time and expertise in framing it, Jeanne Thurber for providing local transportation, and the Friends of the Windham Public Library for funding the project.
Posted by Author and Illustrator of Books for Children at 5:40 AM 3 comments:

I just received a lovely email from a good friend and colleague, Bruce McMillan, a fantastic photo-illustrator and author of many children's books (http://www.brucemcmillan.com/).  He writes: 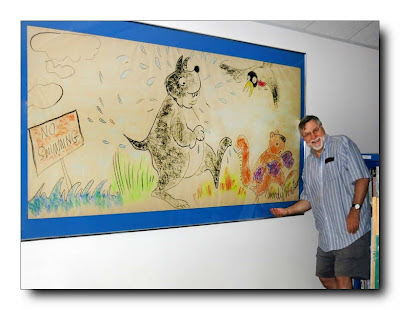 Look what I found at the Windham Maine Public Library (http://www.windham.lib.me.us/), an original HUGE Wendy Watson. 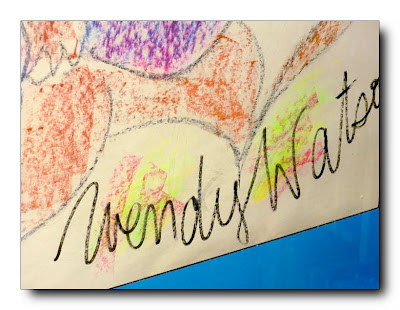 Yep, it's an original. 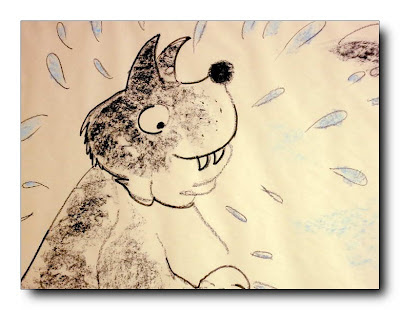 Nice and big and wet and splash.

The reference librarian at Windham is a friend and had always mentioned their Wendy Watson, so I stopped by to see for myself.

When I do a presentation at a school or a library, I alway make up a story and draw a picture for my audience.   And I always invite plenty of input from the audience as to who, what, when, where, and how!  I used a giant black magic marker, and Craypas, to make this picture.  I left it behind for my hosts, as I always do.  How nice to think that it is still hanging in the Windham Maine Public Library.
Posted by Author and Illustrator of Books for Children at 12:04 PM 3 comments: