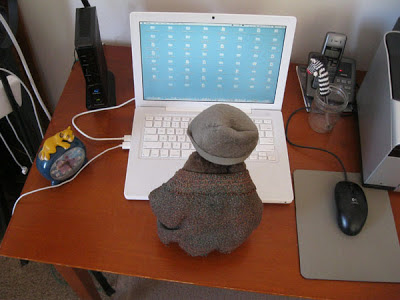 I hate to say it...but this isn't going to work.  My  infiltration of Miss Creative's blog     My posting on Miss Creative's blog, I mean.  I've tried.  And I never give up.  At least usually I don't.  But what's happened is, each time, just as I've settled at the computer, I hear HER coming.  So I have to quick close the window before I've had a chance to save my post---or even write it. 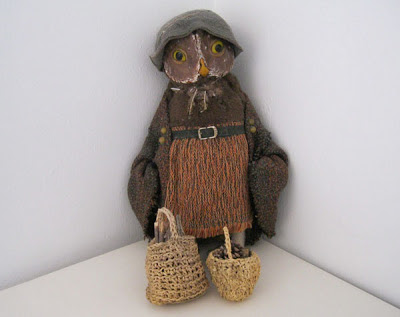 And I fly back to my usual corner so dear Miss Creative won't suspect anything.  But the way she rushes to the computer the minute she comes into the room, and hunches down over it--- 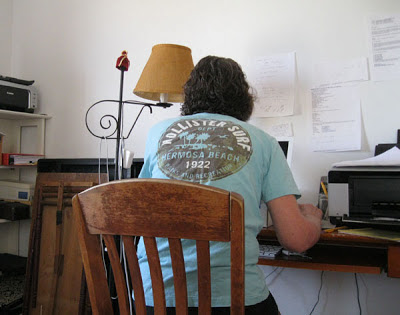 ---like she doesn't want me to see what she's up to or something---well I just KNOW she suspects me and she's snooping around trying to find evidence against me . . .  so I haven't been able to   sneak in   post one single entry.  And besides I HATE that snooping she does.  It's SO . . .  undignified.  I would NEVER do such a thing.  I've got my principles, after all.  As you know.  But anyway---I've got my own blog working again so I'm going to post THERE from now on.  In fact I'm flapping over there right now to tell you the TRUTH about Miss Creative and her back yard. See you there---http://bessiebeetum.blogspot.com/


Posted by Author and Illustrator of Books for Children at 8:12 AM No comments: 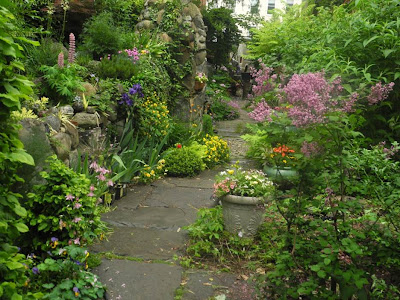 One of my artist friends, Ragnar Naess http://www.ragnarclay.com/welcome.html, is a clay artist who lives and works in a Brooklyn brownstone.  Behind his studio, as part of his work, he has created a breathtakingly beautiful flower and sculpture garden (frequently opened to the public).  When I received my two complimentary tickets to the BEA Auction to which I had donated my Sendak piece (http://thewendywatsonblog.blogspot.com/2013/04/book-expo-america.html)  (http://thewendywatsonblog.blogspot.com/2013/05/my-sendak-piece.html)  I thought immediately of Ragnar.  Over the years he had expressed much interest in my world of children's book illustration; and I was not able to be in NYC for the auction.  I queried him:  Would he like to use my tickets?  Yes! was his reply.  Good, I thought.  I had happily supported the fight against censorship by donating a piece; Ragnar would happily support it by attending the auction.

But that was not the end of the story.  When the auction was over, I received an email from Ragnar.  I opened it eagerly, expecting a  detailed description of the event, perhaps of the refreshments (since Ragnar and I both like to cook).  I was not disappointed.  But then followed a completely unexpected sentence:
We are the proud owners of one Wendy Watson drawing/watercolor, your Sendak piece, which delights us.
When I've donated pieces for fund-raising auctions in the past, I've not usually known who has won pieces that I've donated; in fact I've never known.  But it gives me very great pleasure now to know that my Sendak piece is part of Ragnar's world...along with his luxuriant gardens and his stunning clay creations.  If you are in New York, attend his open studio June 8th and 9th; view one of his shows---enjoy his very beautiful work in every way. http://www.ragnarclay.com/welcome.html 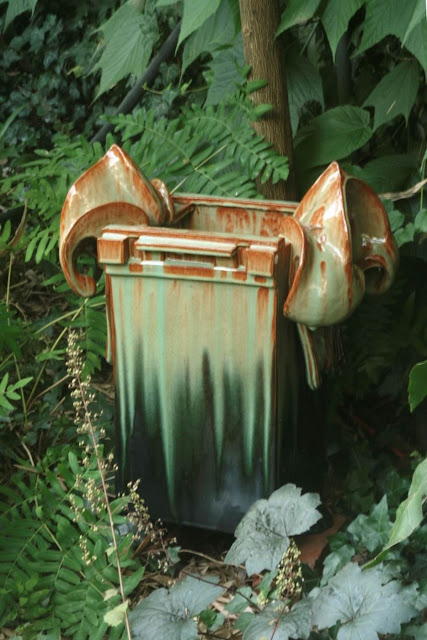 Posted by Author and Illustrator of Books for Children at 11:28 AM 2 comments: