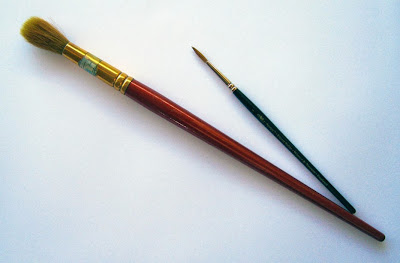 When I employ acrylic as my media, my repertoire of brushes is just a bit larger: 3 synthetic-bristle Winsor & Newton brights, and a tiny sable brush, size 00, for fine details.  All Winsor & Newton brushes are among the most expensive brushes one can buy.  But again, as I say to students:  sit on an orange crate if you must; use an old plank for your desk; store your supplies in a grocery bag.  Save your money for the three things that really make a difference: good brushes, good paints, and good paper.
Posted by Author and Illustrator of Books for Children at 4:26 PM 4 comments: 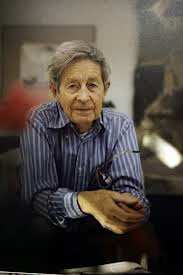 Robert McCloskey, the famous children's book author and illustrator,  was born on September 14, 1914. His formal training was as a painter.  He attended the Vesper George Art School, and later studied at the National Academy of Design in New York City.  I've always admired his work tremendously, as a child and as an adult.  And I feel a special connection with him as well:  he and I both studied painting, a generation apart, with Jerry Farnsworth and Helen Sawyer at their school of art in North Truro, Massachusetts.  In fact, at the time I was a student there, over the doorway of  the main studio room, splashed out with a brush in bold black letters, was the legend: Robert McCloskey, Prix de Rome, 1939.  He must have been a student with Jerry when he won that very prestigious prize.  In studying with Farnsworth, McCloskey was continuing a tradition of outstanding American painting, as Farnsworth in turn had studied with the legendary Charles W. Hawthorne.  McCloskey's early career as a painter was a financial flop, for which we can all be forever grateful: he next decided to try children's books as a way to create an income. 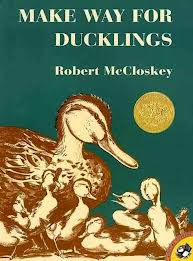 Everyone knows, of course, of Make Way For Ducklings, as well as McCloskey's other picture books.  But the books I love even more---if that be possible---are those for older readers:  Homer Price, Centerburg Tales, and Lentil.  If you are not familiar with these, go find them today.  You are in for a treat. 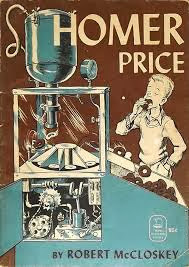 McCloskey was not a prolific artist, by some standards.  But the books that he wrote and illustrated are, as far as I can make out, all still in print---a wonderful testimony to the care and attention that he put into his work.  Below are a few sites that will give you a bit more information about Robert McCloskey and Jerry Farnsworth.

http://www.nytimes.com/2003/07/01/arts/robert-mccloskey-88-of-make-way-for-ducklings-is-dead.html
Posted by Author and Illustrator of Books for Children at 7:46 AM 3 comments: 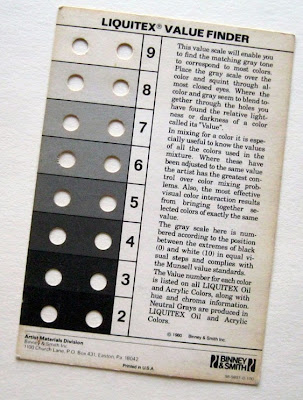 I am by choice a very low-tech kind of artist.  Perhaps even a dinosauric artist.  One of my tools is this Value Finder, created in 1980 by Binney & Smith to use with the Liquitex acrylic range of grays. (On this scale, value 1 would be black, value 10 would be white.)  It's printed on a piece of stiff card stock, about 4 x 6.  The card itself has yellowed over the years, but that does not reduce its usefulness for me.  I lay the card over the area of art that I want to assess.  Then, looking through squinted eyes, I move the peepholes over the art until the color showing through the peephole blends in with the color on the card.  Presto---I have a value number.  Different scales of color value can look slightly different from each other.  This  doesn't matter.  The issue at hand is one of relativity, not absolutes.   I use this gadget to help me keep my artwork---the values of all my colors---consistent throughout a book.  If the darkest shadows in my key illustration have a value of 3, then I want all of the darkest shadows on every page to have the same value.  If my lightest colors in that key illustration have a value of 8, then I want the lightest areas of every page to have that same value.  If the costume of my main character is a nice bright red in its middle tones, then I want those middle tones to be of the same value throughout the book, no matter how small or large the character is on a particular page.  Consistency from page to page in picture book illustrations is critical---and this little card enables me to achieve that with ease.
Posted by Author and Illustrator of Books for Children at 6:51 PM 5 comments: 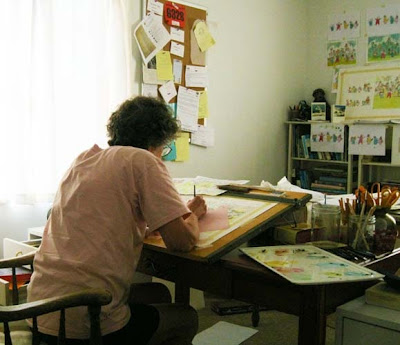 I'm painting and inking my finished art samples...my CD player is on (Julian Bream, Baroque Guitar, in this case)...kitty-cat Elijah is asleep on the bookshelf...there is homemade apple pie waiting for my reward at the end of my day...sheer heaven.

Posted by Author and Illustrator of Books for Children at 4:01 PM 9 comments: 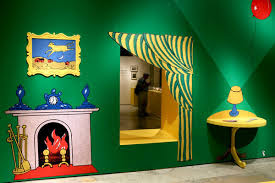 There is a wonderful exhibition going on right now at the New York Public Library:  The ABC Of It:  Why Children's Books Matter.  (http://www.nypl.org/events/exhibitions/abc-it)  I actually haven't seen it yet myself, but even so, I already know it's wonderful---for three reasons.  First, because as a professional in the field of children's books, I believe that what I'm doing does matter, and this show focuses directly on that premise.  Second, because the show was curated by the super-knowledgeable Leonard S. Marcus.  Leonard is also moderating a series of panel discussions in conjunction with the exhibition (http://bankstreetcollegeccl.wordpress.com/2013/09/03/inside-the-abc-of-it-a-series-of-three-panel-discussions-with-leonard-marcus-and-special-guests/) and I encourage you to attend those panels if you possibly can. 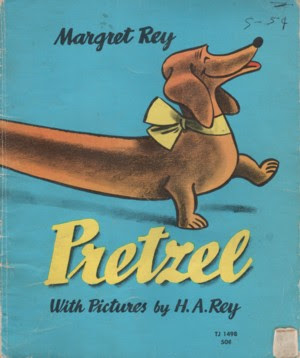 The third reason is because I know from my own childhood that children's books matter.  The first book I remember ever looking at was Pretzel, by Margret and H. A. Rey.  Pretzel spoke to me directly, clearly, emphatically.  I couldn't say what it was that I learned from that book.  All I know is that its story and images have stayed with me, bright and sparkling, throughout my life.  I have only one sad experience with Pretzel.  Many many years ago, I visited an exhibition of the work of H. A. Rey.  Part of the exhibition included illustrations from Pretzel.  And the artwork was for sale.  The pieces were not terribly expensive, even for those days.  But I was a poor, starving artist then.  I debated...debated...debated...and decided that I would not buy a piece.  How I have since regretted that decision.
Posted by Author and Illustrator of Books for Children at 1:05 PM 2 comments: