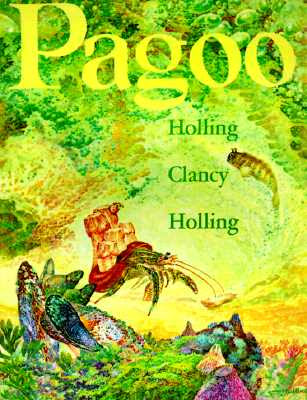 Holling Clancy Holling, the author and illustrator, was born on August 2, 1900.  His work has had a tremendous impact on me.  I first discovered him as a child, when I began reading his books:  Seabird.  Paddle-To-The-Sea.  Minn of the Mississippi.  I kept reading his books as a teenager.  And as an adult.  I still pore over them. 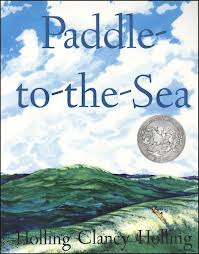 It's not that he directly influenced my style---my work has always been very different from his.  What has struck me, at every age, are certain qualities of Holling's work:  His meticulous and unerringly accurate research that informs every page with fascinating pieces of information, clothed in enticing  images and stories. 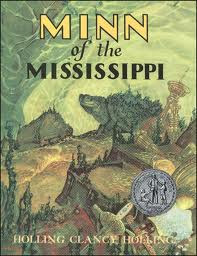 His passion for his work, a passion which sparkles, glows, leaps out at the reader, from every illustration and every sentence.  His love for his subject matter, his media, the composition of the page.  His belief that books for children are of the utmost importance, deserving of one's very best life-work. 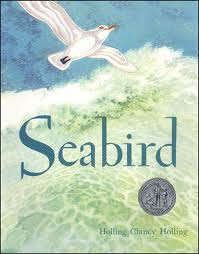 As an illustrator or author for children, one could do no better than to adopt Holling's philosophy and devotion to his work.

Posted by Author and Illustrator of Books for Children at 10:06 PM 1 comment:

FLOW is a critical element in a picture book.  But what does FLOW mean?  I myself always think of a stream of running water, or of a piece of music, as I work out the flow in a picture book.  Water, or a music---they are always in motion. I like to have the art be in motion, or to FLOW, from spread to spread through a book. And I like that flow to echo and support, even embroider upon, the text.  How can an artist create that flow? One very simple way is to increase or decrease the art area (the amount and shape of the space that the art occupies) from spread to spread. I’ll use Maurice Sendak’s WHERE THE WILD THINGS ARE as an example. I’ve deliberately put the spreads into a monochrome, because I am focusing on the art area only.

In spreads 9 – 11, the art area continues to grow, though it has changed its shape and placement.  The change reflects Max’s landing after his ocean trip; the continuing increase in size lets the reader know that we haven’t yet reached the story’s climax.  The change and growth are, again, like a stream shifting its direction, or music exploring a theme.

In spreads 12 – 14, the art area has grown to its maximum size, running off all four edges of each spread.  Even text has been squeezed off the page.  We’ve reached the climax of the story---and of the visual flow of the book.  The loudest part of the music, the stream tumbling noisily over a falls!

In spreads 15 – 16, the art area begins to decrease, signaling the descent from the climax, the beginning of the end of the story.  Just so might music begin to decrease in volume, or water, swollen by a storm, subside into its bed.

And in the final spreads 17 – 19, the art area shrinks further, to the point of disappearing entirely.  The end…of story, musical piece, or stream of water trickling away into nothing. So just as the story line rises, reaches its climax, and then falls to its conclusion, so does the art area echo and repeat the same flow.  So simple, but so effective.

In another post I’ll examine a different kind of flow, using the same book for my example.
Posted by Author and Illustrator of Books for Children at 7:01 PM 2 comments: 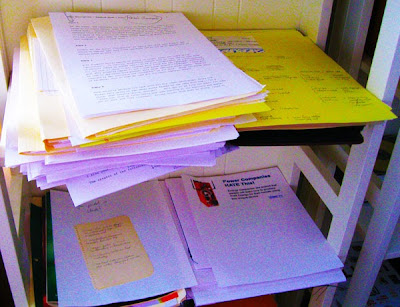 I have always had trouble organizing creative projects.  When I'm working on a picture book, that is not so much of a problem.  The text and plot line are short enough that I can memorize it all and keep it visually straight in my head.  Reference material will usually all fit onto one table.  But I've been working for a couple of years on a longer manuscript with a plot that is more complicated than the picture-book level. The process has turned into a kind of aimless wandering through a literary bog.  The result has been mounds of papers, files, folders, notes, old envelopes, and reference materials. Yes, the mounds are all stacked in piles together on the shelves of one bookcase.  But I have learned through sad experience that this does not qualify as "organized" or "useable" or even "findable". As a result, I've been going in circles---adding more and more to the mounds, but moving no closer to the completion of my manuscript. 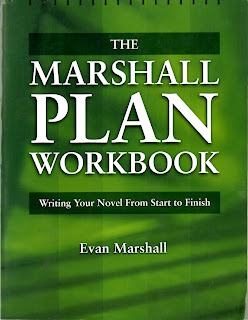 Like many authors, I'm always collecting How-To-Write books.  I recently came across this one.  (It has a companion, The Marshall Plan For Novel Writing).  Hope springs eternal in my breast; though no other How-To book had ever enabled me to make even a dent on my struggles, I snatched this one up as a possible thread out of the labyrinth in which I had become trapped.  To my astonishment---and delight---I have found parts of it very helpful. 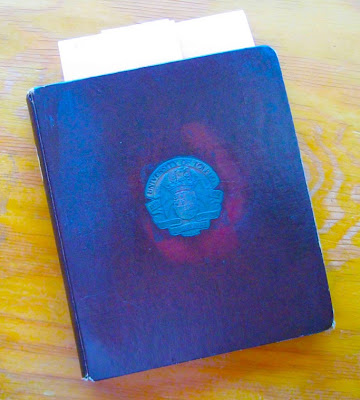 I am still working slowly; that probably will never change for me.  But my manuscript is now contained---manageably---in one notebook.  I FEEL that I am progressing with the project.  (I don't yet dare assert that I AM progressing.)  The Marshall Plan Workbook may not appeal to anyone but myself; we are all different in the ways in which we write.  But then again, it might be just what you were looking for.  So I pass this experience on, for whatever it's worth---and no, I am not being paid to do so!

Posted by Author and Illustrator of Books for Children at 3:56 PM 3 comments: 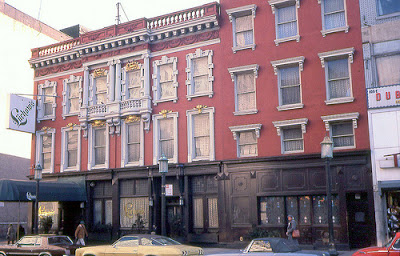 I've been researching some older New York City buildings for a current project.  I came across an entry for Luchow's, the German restaurant that was located at 110 East 14th Street at Irving Place, near Union Square(http://www.toquemag.com/food/luchows-americas-most-famous-german-restaurant).  The restaurant was moved in 1982 to the Theater District in an effort to revive its business, but closed in 1986.  The building on 14th Street was torn down in 1995 after it had been gutted by a fire.  I indulged in a fit of nostalgia as I read all of this.  Very early in my career, I began to publish with Thomas Y. Crowell, a relationship that lasted for many years. 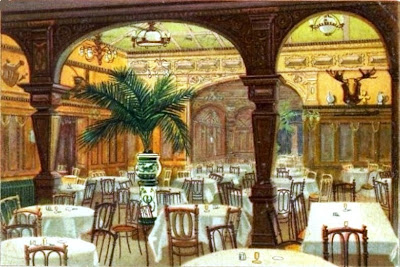 On one of my visits to the city, Robert Crowell, the president of Thomas Y. Crowell, invited me out for lunch. He took me to Luchow's.  This room is where we sat and talked business.  I don't remember what I ate that day.  But I'll always treasure the care with which I was nurtured, mentored, educated, and supported at Crowell:  by my publisher Robert Crowell; my editor Ann Beneduce; my art director Jack Jaget; and my production manager, John Vitale.  I learned so much from all of them.  That was the way it worked in those days.  I am deeply grateful that I was able to be part of those earlier days of publishing.


Posted by Author and Illustrator of Books for Children at 12:44 PM 5 comments: