I can't resist posting another August birthday, this one for Roger Duvoisin. An illustrator and author, he was born in Switzerland on August 28, 1900. He emigrated to America in 1927 and became an American citizen in 1938. He was already working as a professional artist before he came to the USA, but it was after he arrived here that he started his work in children's books. 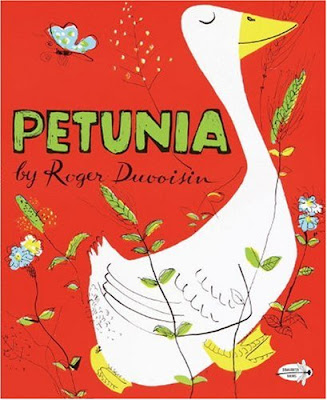 His art is so fresh, free, and comfortable. It looks as though it flowed effortlessly from his hand. 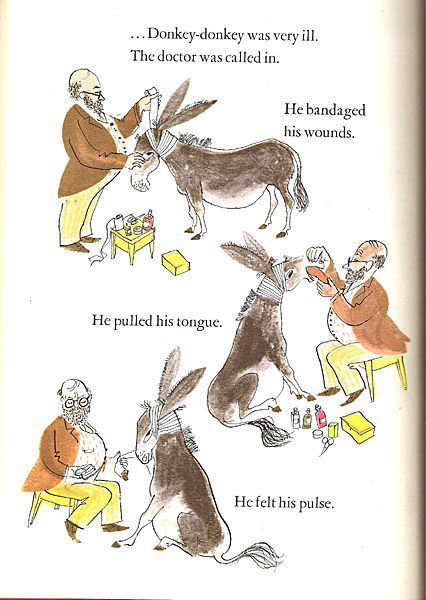 When he works with limited color, his art is just as relaxed and confident. 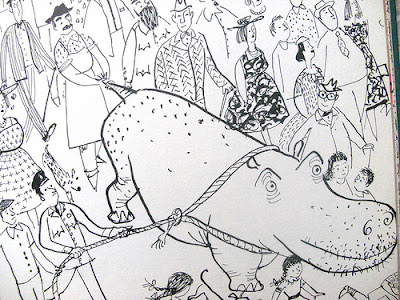 And his black and white work is the same---flowing and loose in feel, but never sloppy or careless. 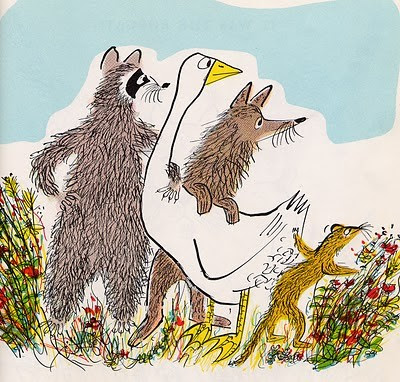 One of Duvoisin's trademarks is his wonderful sense of humor---sophisicated, but loving. It shows up in much of what he produced. 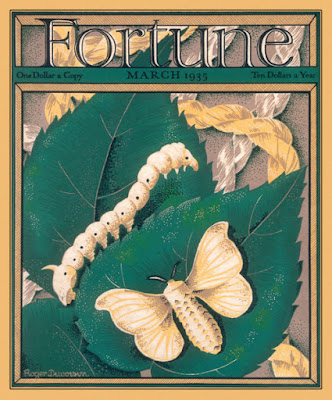 But, like so many illustrators, Duvoisin worked in many fields, not just children's books. As a young artist in Switzerland, he created scenery, textiles, and murals. In the US, he did a great deal of magazine work. Some of that art, such as this piece, is so different in style that we would not recognize it as coming from the same artist. 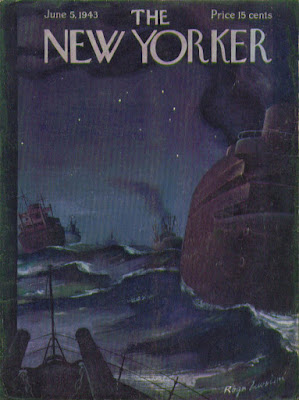 And some of the work that he did during WWII, for example, projects a dark and forbidding atmosphere, very different from his children's books. 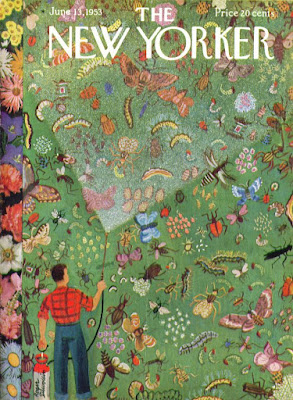 Other magazine work has a feel very similar to the art of his picture books. 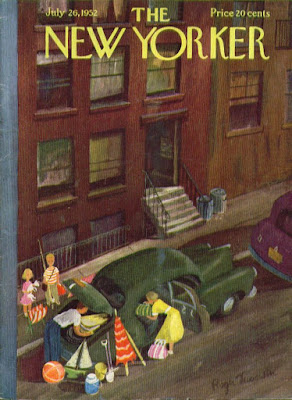 His New Yorker covers tend to be more complex in composition and execution than his children's book art. 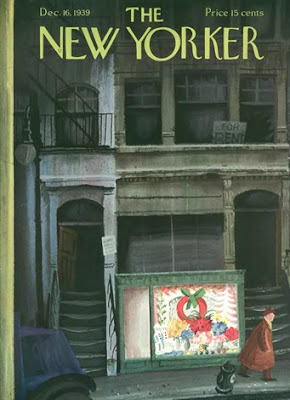 Yet, just as in his children's books, he is very much the story-telling artist, one with a smile. 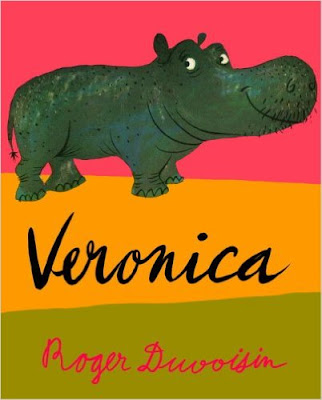 How simple is this picture book jacket---executed with just a few colors, some simple lines, and a lovely dash of humor. But notice how much it tells us about the heroine, Veronica, and the story we are going to hear. It takes a master artist to create an image that is so uncomplicated and child-like, and yet so rich and complex.

There is not a great deal of information about Duvoisin on the internet. Two links will tell you a bit more about the author/artist:

Posted by Author and Illustrator of Books for Children at 6:20 PM 1 comment: 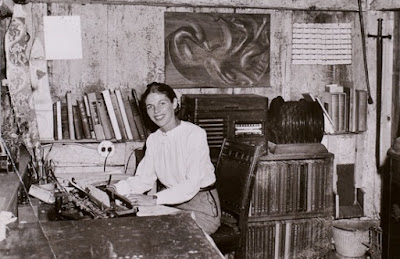 Virginia Lee Burton was born on August 30, 1909. We know her today as the author and illustrator of beloved children's books about anthropomorphized machines and objects: 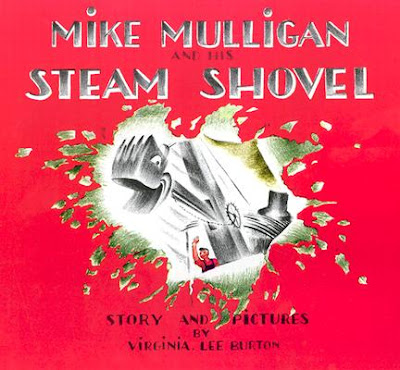 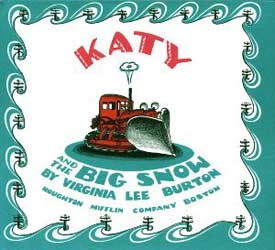 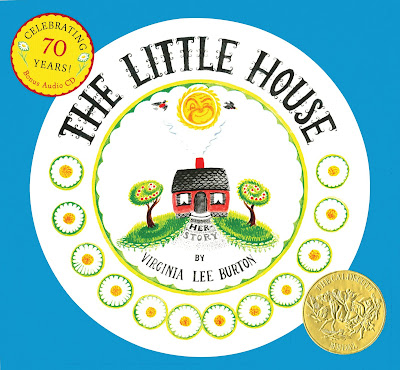 ..and The Little House, which was always my favorite.

Her full-color illustrations are masterpieces.
But like so many illustrators from those earlier generations, she was also a master of black and white techniques. 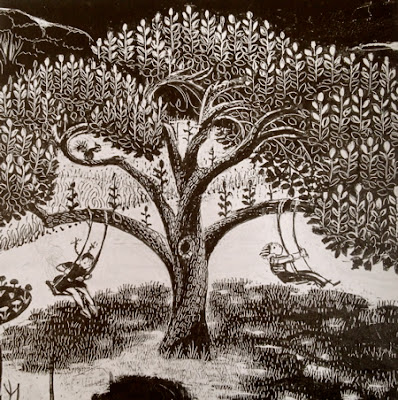 Another way of describing black and white work is as "one-color" art---the artist is working with just one color on the working surface.

Burton's skill in working with one color is evident in her other absorbing artistic interest, print-making---an interest with which her readers might not be familiar. In this design we can see a resemblance to her illustration work. 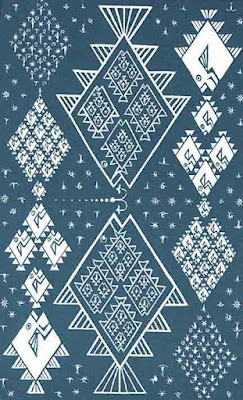 This print is more stylized, and we would not know, unless we had been told, that it was work by the same artist. 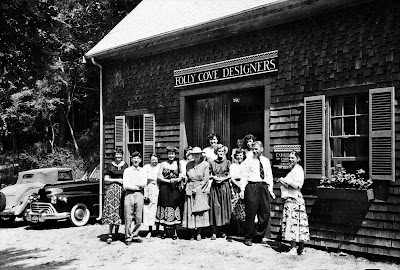 Burton did much of her print-making on cloth, and her interest in this field led her to found the Folly Cove Designers, in Cape Ann, Massachusetts. This group worked together from 1938 to 1969, creating prints that were executed mainly on fabric. Burton died in 1968. Since the group disbanded the following year, it leads me to conclude that it was her energy that kept the group together and active for all those years.

The links below will give you more about Virginia.

Posted by Author and Illustrator of Books for Children at 1:57 PM 1 comment: