In my last blog I reported that I had found a (modern ballpoint) pen for Raymond's pocket-dairy.  The pen and the diary clashed somewhat, visually as well as historically.  In the meantime I had been combing through internet sites, looking for information about Victorian-era pens and pencils, and hoping perhaps to discover at least an image of an implement more suitable for Raymond and his situation.  I found pictures of dip pens

and the traveling inkpots that would accompany them. 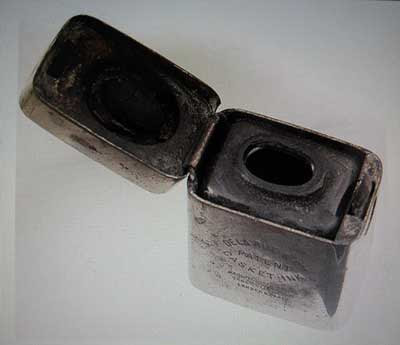 I thought, this is a recipe for disaster in Raymond's, um, paws.  I then learned that the attempts to create fountain pens (i.e. pens that carry their own ink supply) started hundreds of years ago, but by Victorian times these models still were not trustworthy.

The Victorian-era versions were called eye-dropper pens, meaning that one filled the ink reservoir with an eye-dropper.  Even at home at one's desk, this would be problematic; but trying to do this while on the road, or on the run?  Not at all practical.  These pens had another serious problem.  Their ink reservoirs were apt to leak, or even flood, with no warning.  Again---messy, unpredictable, and impractical.
After all this research, it was becoming quite clear that Raymond would actually have a pencil, not a pen, for his pocket-diary.  This conclusion was reinforced by the few entries that had already been made in Raymond's pocket-diary before I acquired it for him---entries that were made in pencil.  So when I found an image of this lovely sterling silver mechanical pencil (which is open in this image, but can be closed to about half its length), it seemed that this might well be Raymond's writing tool.

But I kept looking, just because it is in my nature to attempt to exhaust any topic I'm researching.  And once again, it seemed that I was led by an outside force.  I stumbled onto an image that I recognized immediately as RAYMOND'S PENCIL:

Raymond is an orphan, and I knew that his father had left him one very important item.  When I saw this image, I thought, "Oh, so that's what it was!"  This small pencil (closed in the image above) holds a writing lead at one end.  At the other end?  A small but sharp knife blade for...for those inconvenient moments that occur in a life of uncertainty.

The pencil is etched with the name of Raymond's father, and on the other side of its barrel is etched a very handy ruler of 3.5 inches:

Dear Reader, I had to buy this.  There was no way I could refuse, with Raymond breathing so hotly down my neck.  And, being the frugal Yankee that I am, I will not disclose, this time, how much it cost me.  But after all---I believe in sacrificing for art.  And the finishing touch to this whole episode is that the pencil fits perfectly into its alloted space in Raymond's pocket-dairy. 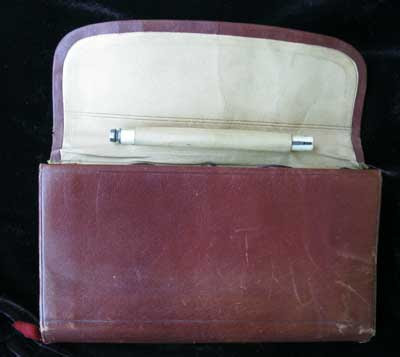 Raymond is calling---nay, demanding---that I return to my writing desk.  He has told me that his mother also left him something, and in due course I am sure that object will make its appearance.  But in the meantime---Raymond is dictating, and I must transcribe.
Posted by Author and Illustrator of Books for Children at 12:04 PM