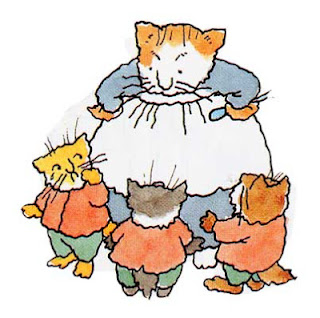 I'm restricted in this public blog by space and copyright considerations, so I'll use the text for THREE LITTLE KITTENS, which is short and in the public domain, for my demonstration of manuscript analysis.  Here's the text, broken up into the sections that I later talk about:
1)
Three little kittens


I make my initial analysis using just the typed manuscript itself.  I'll refer by number to each section numbered in the above text.

1)  I first identify the part of the text that "sets the scene". With the THREE LITTLE KITTENS, I feel that by the time I reach "they lost their mittens," the story action has already begun. So in fact it is the simple phrase "Three little kittens" that sets the scene.  That is the text I would paste into the opening spread, spread 1.  (The actual scene that will be set here must of course be imagined and portrayed by me the illustrator.)

2)  I've already identified the phrase "they lost their mittens" as the point where the story begins, and I would make that the text for spread 2. Later, when dividing up the bulk of the story text, I might want to add a bit more of the text to this spread.

I next look for the "final crisis", the "final resolution" and the "wind-down".  I usually work backward when identifying these segments.

5)   The 3 final lines beginning with "But I smell a rat close by" seem to me a perfect "wind-down", and I would make that the text for spread 12.

4)  Spread 11, the final resolution, might have as its text the 5 lines beginning with "The three little kittens they washed their mittens."

3)  Spread 10, the final crisis, might contain the 4 lines beginning with "What! Soiled your mittens? You naughty kittens!"

My next step would be to paste the text into my simple dummy, according to the opening and closing divisions I've made in the manuscript, and distributing the remainder of the text through the 7 spreads that are still blank. The text seems a little bland to me; I might decide to add some extra drama to the story, for example with a sub-plot that is portrayed through illustration alone.  But first I'll spend a fair amount of time just turning the dummy's pages, and reading its text aloud, over and over. Do the break-ups and pacing work the way I want them to?  If they do not feel solid and inevitable, then the rest of my work on the book will be built on a flimsy foundation.

Posted by Author and Illustrator of Books for Children at 1:45 PM