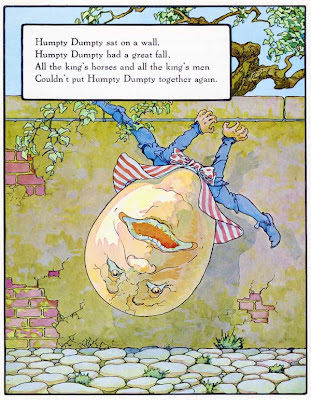 Careful analysis and paging of a picture book manuscript is an important step toward presenting the text visually to its best advantage.  This process also helps the illustrator to pinpoint, and compensate for, any structural weaknesses in the text.  It can even enable the illustrator to turn a minimal text into a full-length picture book.  I'll choose "Humpty Dumpty" as an example of this last.

As usual, I look in this text for 5 critical points (see my blog http://thewendywatsonblog.blogspot.com/2012/04/picture-book-design-analyzing.html): setting the scene; the story begins; the final crisis; the final resolution; and the wind-down.

My take on "Humpty Dumpty" is that several segments of the necessary structure are missing.  There is no "setting the scene"---with the very first words of text, the story is already in full swing.  Humpty Dumpty has already taken action: he sat on a wall.  If this were the beginning of an actual picture book, I would wonder:  Why did he do that?  I  can identify the final crisis---despite many attempts by all the king's men, Humpty is still in pieces.  But there is no final resolution, and no wind-down.  Again, if the text were parcelled out, as is, into a picture book, and I came to the last page and read "couldn't put Humpty together again.  The End" I would wonder: Is that it?  That's the end?  So my assessment is that the text, as it stands, is only an anecdote, not a story with a beginning, middle, and end.

Can I, the illustrator, extend this truncated text enough to support a full-length picture book?  I would need, first of all, to flesh out the rest of the story in my mind.  What IS the setting?  What is Humpty Dumpty's life normally like?  And what then leads him---or forces him---to climb up onto a wall?  This part of the story I would then portray through pictures alone, on the very first pages of the book---the half title, title, and dedication, probably.  On the first spread of the actual body of the book I would place the first words of the text with its accompanying illustration:  "Humpty Dumpty sat..."  Word balloons with my own additional dialogue could add to the story-telling.

And at the end, what is the final resolution?  What happens after the the King's men fail to repair the broken Humpty?  Is Humpty then turned into an omelette?  Or is he repaired after all in some miraculous fashion?  I would need, also, to create a wind-down.  The towns-folk, comfortably full, settling in for a nice nap after devouring the Humpty-omelette?  Or the re-born Humpty, happily restored to a life in which he'll act perhaps more wisely---or perhaps even more foolishly?

As at the beginning of the book, I'd tell the story of these segments through wordless illustrations that would occupy the two or three final spreads of the book.  Thus the final words of the verse "...couldn't put Humpty together again" I'd place perhaps on spread 10, leaving spreads 11 and 12 for the wordless illustrations that would finish up the story.

Humpty Dumpty is an extreme example of a text whose structure needs assistance. But the process I've outlined demonstrates one of the most helpful techniques that an illustrator can bring to any picture book manuscript.

(The illustration is by the great Frederick Richardson, illustrator of the Classic Volland Edition of Mother Goose, with which I grew up.)

Posted by Author and Illustrator of Books for Children at 12:15 PM